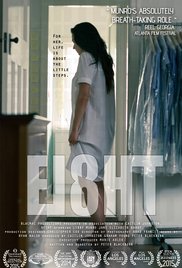 A woman suffering from Obessive Compulsive Disorder (OCD) struggles with her morning routine to get to work on time.

Sarah Prentice has not left her home in two years. Her fear of the outside world has crippled her ability to interact with people. She struggles through the everyday processes of life as she also suffers from an uncontrollable Obsessive Compulsive Disorder. Her life is focused on the simple process of getting ready for work. For the average person it is as simple as getting up and getting dressed, for Sarah it is a marathon of emotions.

Eight is a powerful film that shines a spotlight on mental health. As it was filmed in one continuous 82 minute take the viewer is placed in the mindset of Sarah Prentice and cannot escape her world for the full length of the film. Described as harrowing, the film quickly opens up discussion as to what life can be like for those who suffer from anxiety disorders. Kynteon State High School screened the film to their Yr 11 & 12 social studies class during mental health week.

To arrange a screening inside your school contact us at info@blacmacproductions.com

Demand.film can bring films from their catalogue to a cinema near you. You bring the crowd, and they bring the movie. A great idea for fundraising, community awareness campaigns, or a film club get together. You call the shots. If you would like to organise a cast and crew Q and A, we may be able to help!